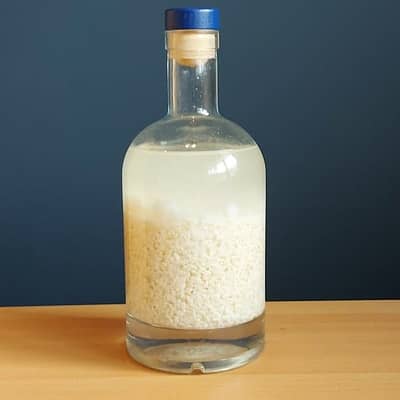 Mirin is a sweet wine used in Japanese cookery. In the UK we’re most familiar with its use in teriyaki sauce, but it is used in a wide range of other Japanese dishes.

Traditionally mirin is made from shochu, a Japanese spirit usually made from sweet potato. Shochu is difficult (and expensive) to get hold of  in the UK, so I’ve used vodka.

After 3 months the mirin develops a rich golden colour. At this stage you can strain off the solids or leave it to mature further. I like to leave the solids in the liquid, carefully pouring off the amount I’d like to use for each recipe. This means I get the best of both worlds – the ability to use it now and for it to mature further with time.

Much of the mirin available in the UK is made from sweetners and not produced in the traditional way. By creating your own mirin you get to experience a product that is naturally fermented and rich in nutrients. 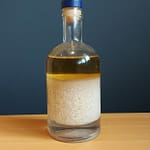 Mirin is a sweet wine used in Japanese cookery. It is easy to make and much tastier than commercially available products which are no longer produced in the traditional way.
Prep Time10 mins
Fermentation Time90 d
Course: Ingredient
Cuisine: Japanese
Keyword: Koji, mirin, rice wine